I use Font Squirrel for this site. Their selection is incredible (and I don’t like anyone hosting my font files but myself). Though you’ve got to admit one thing: if google is in it, then they’re in it to win it. So their service will only get better over time. And this means the good news for all of us is a richer internet with more typeface variety. Sounds good to me.

I’ve been thinking a lot lately about the MTV paradox, which is, they are (or were depending on which letter is next to your “gen-” label) the first name that comes to mind when people think music videos. Oh, and footage of dancing spring break babes and shirtless meat-heads, they’ve got that too… But now people are going to YouTube for music videos, and why not? The content is available for free on-demand. And new bands without the resources to create highly produced videos are experiencing more than a modicum of notoriety when something truly engaging is created. Remember OK Go from 2007? The only drawback to YouTube in my opinion are the annoying people recording their reactions to things I could care less about and the crap quality of the video and audio that comes form their videos. Both fixable issues.
So what does MTV do to maintain its relevance in the music video space? We’re all accustomed to the meme, “content is king”. And there is no better test case for this than MTV. They’re a marginal player in the record industry, produce only some of the videos they air and of the videos they do produce they don’t necessarily own the rights to those songs. Lawyer Wars – fight!

If they reach a deal, the service could mark a significant step forward in Google’s attempt to generate revenue from YouTube, which it acquired for $1.65 billion in 2006.

It looks like the lessons of Hulu are being heard loud and clear: team up at the source and crack open the honey-pot for all to taste. Only this time there’s a twist by involving YouTube, which I can only guess is intended to leverage their well-known, well-used and cross-channel (web, mobile, Apple TV) distribution platform. You Tube also provided both the biggest threat and the biggest benefit to record labels at the same time. Their content was being pirated for free, which no one at the big bad labels could stomach, but paradoxically, this freely distributed content contributed to cold, hard, record sales by promoting bands through social networks and rankings. In one fell swoop this deal mitigated the negative and reinforced the positive. Brilliant!

So what is MTV to do? Without exclusive ownership of content, licensing restrictions must provide significant handcuffs to continued domination. With users already establishing digital use-patterns that don’t involve MTV at all, eating away at that pattern must be nigh impossible. Sadly, the ship might have sailed on this one. Record labels no longer have an incentive to call a do-over and bring MTV into the digital fold. It’s too bad too, I grew up on that channel, man – used to love 120 Minutes…

This seems to be a sniffer issue that they have now resolved for the iPhone. Wheew!

This morning I noticed Google changed there iPhone reader to something that looks like it was designed for a clam-shell ca. 1999. WTF? 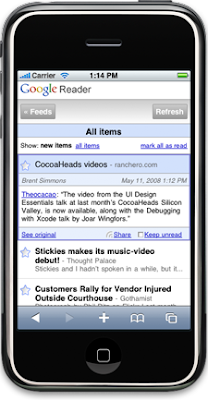 I really loved the sophistication of their old mobile reader – you could browse folders and really do anything that the full-featured version could do. It also used consistent UI paradigms between the mobile and full versions. I also appreciated the integration of that top blue bar (not shown in demo shot, but trust me, it was there) with the rest of their mobile offering. I can’t stress enough how disappointing this revision is.

Maybe their going to save the good version for their android phones, which would be a shame because I’d then have to choose between tight music integration (iPhone) and fantastic & integrated mobile web content delivery.

Someone bring the old mobile reader back!

They’re subtle, but they’re there. Google has finally realized that users need to be able to refine their search and manipulte the data-set they’re returned not just see one very long list. I’m currently working on Search/Research for a client and now that I see this through the lens of the requirements we’re working with – it’s a very long time coming. Good job Google, even if it is a couple years late.

To commemorate their 10th anniversary, the folks over at google have put their site and search database live exactly as it was in 2001. Try it – it’s exactly the same. The biggest thing for me though is all of the links are dead. I found the search results interesting in a time-capsule sort of way, but couldn’t continue my trip down memory lane because none of the click-throuhgs worked. Such a reminder of the temporality of the work we create for this business…